Emma Hardy: How do you connect with your culture, and why is that important to you?
Atong Atem: Connecting with culture is really important to me because it's what allows me to know my place in history, time and space; how I've gotten here and what I can do with what I've got. I firmly believe in the experiences of our ancestors having a profound impact on who we are—emotionally, psychologically, metaphysically—so it's just rational for me to look for answers and understanding in things that've come before me. I mean, it's as simple as wearing certain clothes, or teaching myself to deeply love things about me that are inherently ancestral: my skin, my nose, and so on.

EH: You describe yourself as being a Third Culture Kid. Can you explain what that means to you and how it informs your work?
AA: To me, the term Third Culture Kid defines the in between spaces I occupy as a displaced person—being not entirely “Australian” nor entirely South Sudanese. It's interesting because the way we feel about our identities is so intangible. For instance, genetically I'm 100% South Sudanese, but I don't feel it because I grew up in Australia and have a cultural connection to the Central Coast. TCK is really empowering too in that, having the language to talk about your experience allows a person to take ownership of their narrative and allows people to make connections on common ground. I wish I had access to the language that's widely available today as a kid so that I could have connected with other TCKs and learned early on just how NOT alone I really am.

EH: You're a writer, a photographer and a visual artist. How does different media allow you to express themes of culture in your body of work?
AA: I mostly think of my body of work as an ongoing self-portrait or psychoanalysis of myself and my ancestors—so maybe it's because I get bored. Almost like when you're painting a portrait and you spend three days straight on the left eye until you can't look at eyes without getting mad, so you move onto the right ear; maybe I'm just moving on to different parts of my extended body of work based on how I feel, and how I feel like expressing [those feelings] at the time. It might be deeper than that, but I haven't really thought about it! It's fun to use different mediums though because some things work better in one medium than another. 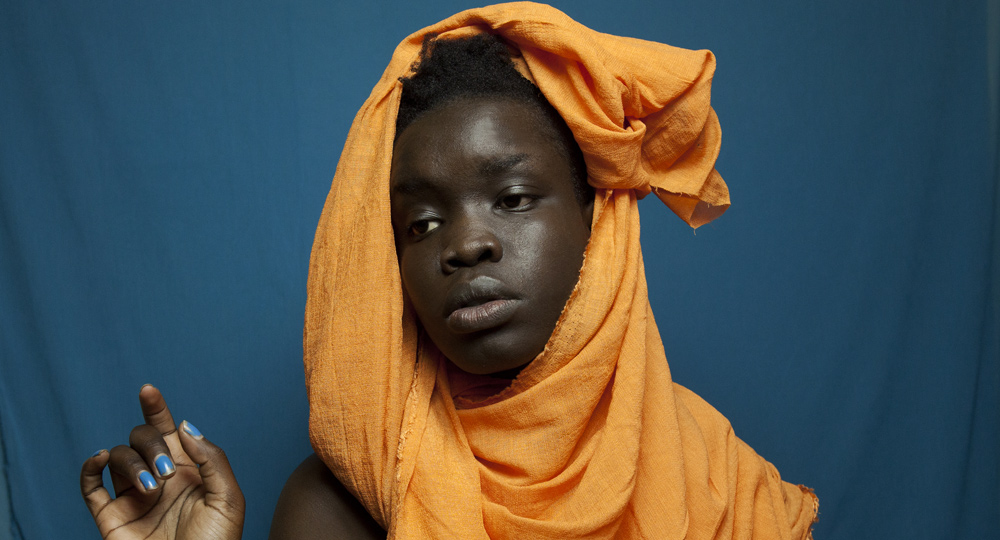 EH: Your photographs are often deliberately staged. What ideas are you trying to convey through the construction of your photographs?
AA: Most of what I'm trying to convey is the deep joy I feel in living my culture day to day. I get excited when I see a black person wearing Ankara prints or with big beaded jewellery, and I wanted to recreate that joy. I also wanted to pay homage to the photographers who've inspired me and who took studio photography and made Afrocentric celebratory and very, very cool in the 60s-80s. Malick Sidibe, Philip Kwame Apagya, Seydou Keita and so on. Again, it's about situating myself as an artist and a black woman in history.

It's exhilarating because in the grand scheme of things, it doesn't matter if no one sees my photos. It doesn't matter if people see them and hate them. It's entirely about my desire—in that moment—to paint my face or draw myself and document it for the void.

EH: How do you feel self-portraiture allows you to express yourself and your culture?
AA: Self-portraiture allows me to embody whatever ideas I'm thinking about. None of my self-portraits are really thought out—they're all completely spontaneous and usually shot at around 4am when an idea comes to mind. I'm really grateful that I'm not very self-critical because it's allowed me the freedom to just sort of do something, say painting my face and wearing a particular costume, putting a muumuu against my door as a backdrop and then take and edit those photos and share them all in one, long breath. It's exhilarating because in the grand scheme of things, it doesn't matter if no one sees my photos. It doesn't matter if people see them and hate them. It's entirely about my desire—in that moment—to paint my face or draw myself and document it for the void.

I think culturally, South Sudanese people love to dress up and look good, or at the very least interesting, so a lot of my influence in my self-portraits is cultural. My love of bright colours, patterns—and whatever the opposite of minimalism is—is entirely cultural. Those are things I learned to love from my family and from my ancestors. 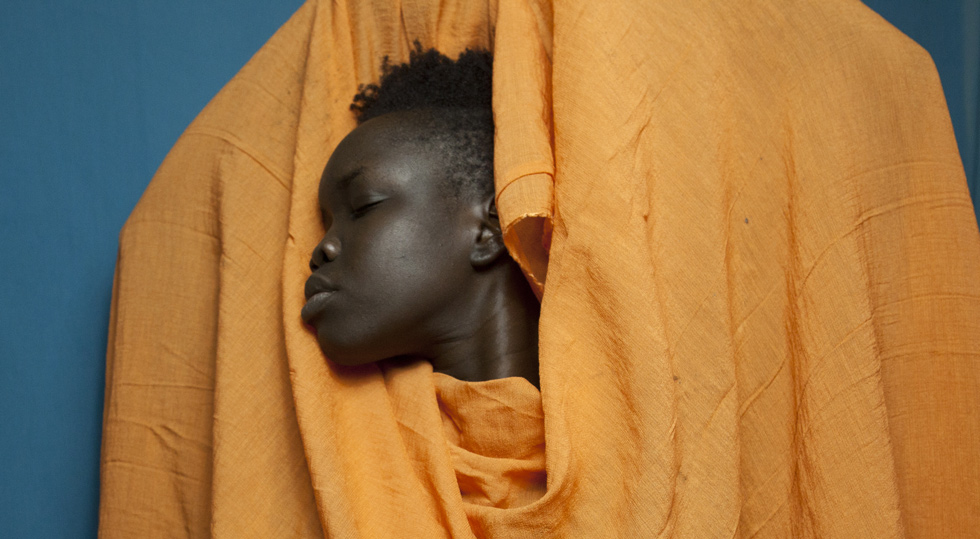 EH: You talk about decolonising. How do you attempt this through your work and life? What does decolonisation mean to you and your connection with your culture?
AA: I had initially written a long and wordy response to this but the more I think about decolonisation as an African person, the simpler it seems to me. For me, it's about acts of resistance, resisting colonial conceits, resisting white supremacy, resisting self-hate—and the biggest, most powerful form of resistance to me is existence.

Choosing to exist as authentically as possible—as a dark-skinned woman, as a Dinka Bor South Sudanese person, as a displaced person, as a sick person, as drop out—is resistance. Which definitely means most days I just wanna stay home and drop the heavy burdens from my shoulders, but when I see other people who the world wants to destroy existing despite that, it's like "Damn, that's it, that's the answer!". I mean, of course it's way more complex than that, but as far as my survival is concerned, at its core is a foundation of resistance which leads to solidarity, self-love and the little unlearnings of all the things colonialism imposed on us.