Reflecting on the Invasion Day Rally

January 26 is always heavy.
But we show up.
We show up for our Indigenous brothers, sisters, aunties, uncles and elders. We show up for those who could not bare to show up and see the weight of their heart carried in the eyes of another.
We show up and we scream for justice.
We show up with intent.
We show up to say 'Hey. I see you and you see us, we see each other and we are here.
We will always be here.'
We march in peace and we are not like them.
Shame.
—I show up for my Dad the late Maxi Snider, Mum Roseanne and my Djabuguy family. I show up for the entire mob.

A week ago today over 100,000 people stood in solidarity with Indigenous Australians across the country, to protest the Australia Day Holiday at the Invasion Day Rally.

The event is organised annually by the Warriors of the Aboriginal Resistance, and supporters increase by huge amounts each year as awareness about the true history of the holiday continues to spread.

Unfortunately still, for many Australians January the 26th is a day of national celebration. And the Invasion Day March - which begins at the bottom of Parliament House then travels down Bourke Street - follows closely behind the Australia Day parade through Swanston Street.

'Invasion Day always will be Invasion Day. Because of the lies of a colonial-minded government,' said speaker and co-organiser Ken Canning.

'I will never celebrate Australia and I will never consider myself Australian…every day is Invasion Day when you are colonised.' wrote Nayuka Gorrie, who spoke at the Melbourne rally - which was interrupted later on by an Australia Day Parade Nationalist at Federation Square, who was quickly escorted out by police.

If this country has any conscience it will start the healing process with truth telling. —Meriki Onus

His presence, and the fact that Australia Day is still officially a national holiday, is just another example among many that reaffirms the importance of showing up with intent to protest for Indigenous rights every year. As well making sure that our involvement as allies is followed up with support for Indigenous Affairs year around.

Details of many petitions and great organisations have circulated since the Invasion Day Rally, and donations are especially important for descendants of settlers to consider (and even more so for those who benefited from working on the Australia Day Public Holiday for penalty rates). 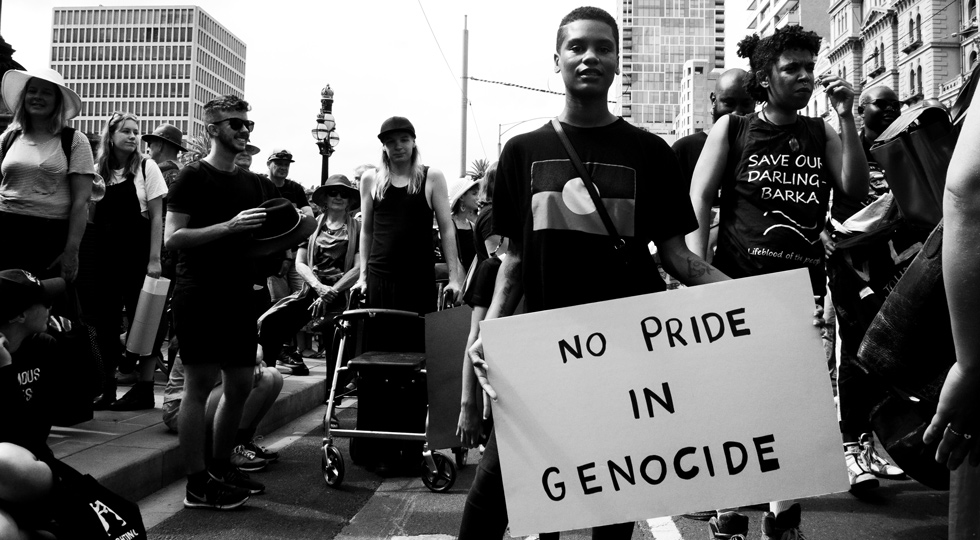 Some excellent non-profit Indigenous organisations to support are: Warriors of the Aboriginal Resistance, who work across several areas toward decolonisation and the philosophy of Aboriginal nationalism, and organise the Invasion Day Rally; Victorian Aboriginal Health service, who address specific medical needs of Victorian Indigenous communities; and End Aboriginal Deaths in Custody, which is a petition to abolish the offence of public drunkenness that was started by the family of Tanya Day, who was arrested for public drunkenness and sustained injuries while in police custody that later claimed her life.

The rally was a mix of sombre truths, sadness and beauty that so many were there, all singing in language together, and eventually ending in a celebration for the right reasons at Treasury Gardens. On Invasion Day we remember that silence is complacency. As settlers on this land, where sovereignty was never ceded and First Nations People are still being stolen and erased, our involvement in the fight must go beyond the Invasion Day Rally to inform our actions and intentions every single day.

See more of Lilah's work at her upcoming Solo Exhibition. Opening October 7th at LCI Melbourne, 150 Oxford St, Collingwood. She will be exhibiting works from Ghana's Cape Coast to commemorate 400 Years since the first slave ship landed in the Americas from Africa.